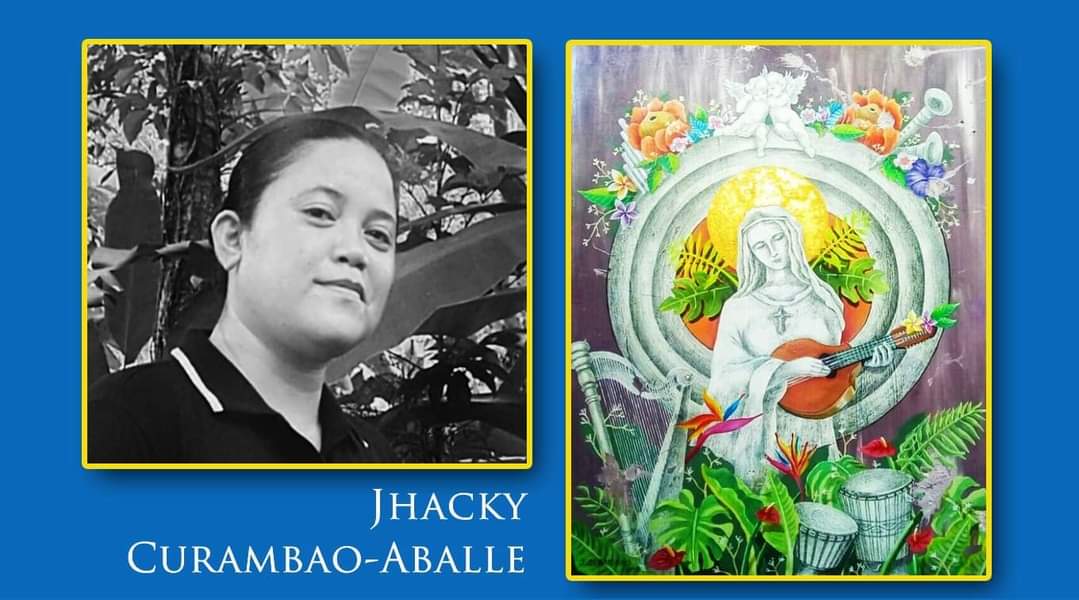 More popularly known as “Jhacky”, JACQUELOU CURAMBAO-ABALLE was born on March 24, 1980. She is married to Emelio Aballe, with two kids, and keeping her home in nearby Corella town.

She finished her Bachelor of Fine Arts degree major in Interior Design from the University of Bohol in Tagbilaran City.

She is one of the most active visual artists in the province of Bohol, doing commissioned works in private homes and private business facilities as a noted muralist known for her delicate renditions of nature subjects.

She has also worked as a children’s book illustrator, as well as in many church restoration works. Through the National Museum she became involved in the conservation works done at San Agustin Church in Intramuros in 2016, where she led the team that did the el secco ceiling paintings.

At the Inmaculada Concepcion parish church in Guian, Samar, which sustained near total destruction during Typhoon Haiyan in 2013, she also got involved in the restoration of its ceiling paintings and its retablos.

At present she is also busily engaged in the restoration work done inside Maribojoc church. All at the same time, Jhacky functions as chair of the Visual Arts Committee of the Bohol Arts and Cultural Heritage (BACH) Council, as well as coordinator of the BAJI Arts Collective (an all-female aggrupation of Boholana visual artists), and an active member of the Tadiyundi Arts Collective.

In her precious spare times she does what she loves to do most – paint her visions on canvass till the wee hours of morning.

So where does Jhacky summon the energy and the versatility to attend to her canvas, climb up scaffoldings to do restoration works at dizzy heights, join a Tadiyundi performance, attend BACH council meetings, motoring to and from work, and above all, fulfill her role as wife, mother and housekeeper?

From being a Boholana, of course – and from being a woman artist, above all.

From HanduLarawan: A Visual Artist Exhibit