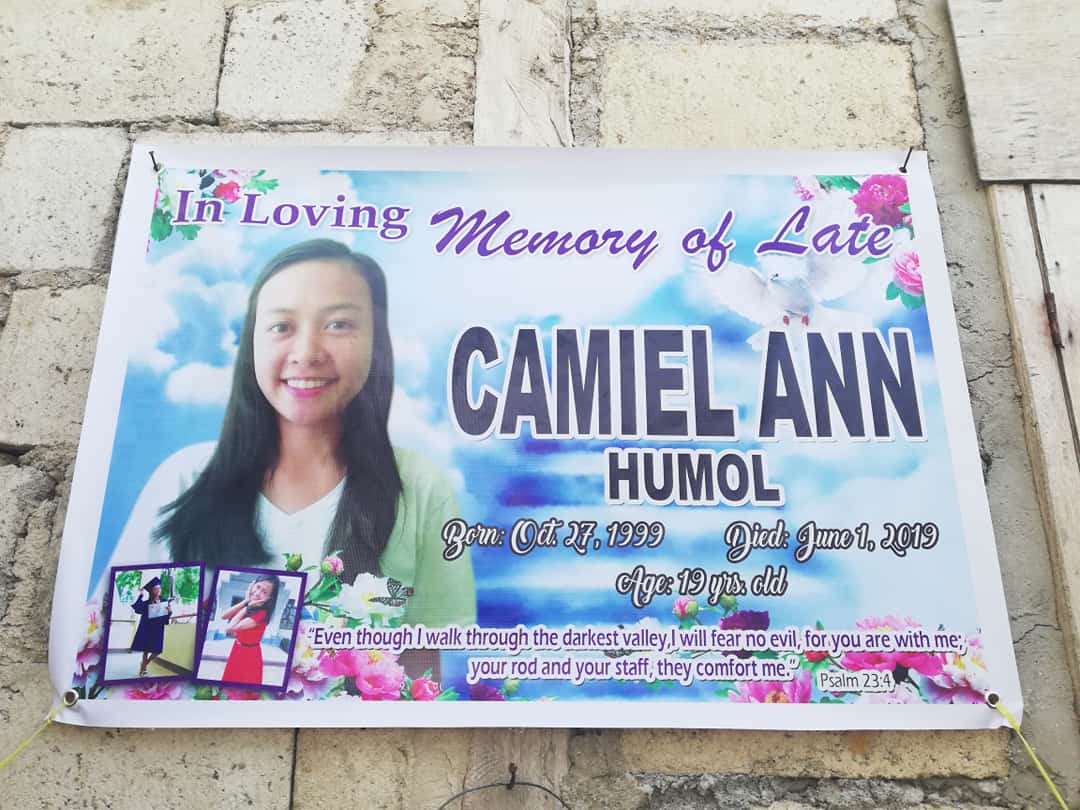 The family of Bohol teenager who killed self after she was scammed said justice is far from over.

They vowed to pursue justice for Camiel Ann Humol, 19, of Barangay Santo Tomas in Trinidad town, was laid to rest on Tuesday, June 11 in a cemetery in San Miguel town.

For failing the college entrance exam and being victimized of a scam led a Bohol teenager to despair, eventually prompting her suicide.   She decided to take her own life attempting to slit her wrist and eventually suffered a heart attack.

Camiel who dreamed to become a teacher took the entrance examination at the Trinidad Municipal College (TMC).  She finished K-12 at Hinlayagan National High School last April 3 this year.

But her hope crashed down when was informed that she couldn’t be admitted into college with her failing scores. She then became moody and sad.

“So gidibdib niya kay gustong-gusto jud niya mo-eskwela (She felt bad about it because she wanted to finish her studies),” said Crispina.

Camiel lived with her grandmother Aurelia since Crispina had her own family.

Crispina, 44, said that her daughter was born with ventricular septal defect (VSD) — sometimes referred to as a hole in the heart —and had already been advised by a physician not to exert herself too much.

She described her daughter as “buotan, dili lakwatsera ug mahadlukon sa Ginoo (good, homebody and G-d fearing).   She even led the children in a Bible study.

Inside Humol’s house, Biblical verses and sayings were posted in the sala, her room and even in the kitchen.

However, it was at the hospital that Crispina learned that  her daughter’s extreme depression  was not also cause by the entrance examination but of a scam.

“Na-scam akong anak. Na-scam siya nabiktima siya sa among kawad-on (My daughter was scammed. She had been scammed because of our poverty),” said Crispina who was holding tears.

Crispina narrated that when her mother Aurelia received a text message that she won P700,000 Camiel believed it was real.

Camiel, according to Crispina, was driven to get the large amount of money to fulfill her dream of finishing her studies and lift her family out of poverty.

She texted the number asking how to claim the money.

Camiel talked to a certain Ramon Lopez who told her before she could get the reward she had to pay P50,000 for processing fee in order for her to claim the reward money of P700,000.

In a recorded conversation, Lopez convinced Camiel that she could pay through “hulgan” or daily payment.  And she assured Camiel that he would be the one to process the papers in the bank.

Camiel raised money by convincing her grandmother Aurelia to help her.

She started paying Lopez on April 17 until May 24.  Camiel had recorded it in her notebook how much she sent to Ramon through Smart Money remittance including charge fees and fares.

Aurelia, 70, said she helped her granddaughter to look for money by asking her neighbors and relatives.  She sold pawned her farm for P25,000 and sold her cow at P14,000.

Ramon told her she still needed to send the money since her cheque was on hold.

(She prioritized to send the money to the man even if they don’t have something to eat. That man killed my daughter. He didn’t know that my daughter had an heart ailment. He pressured her, she cried and became hysterical to where to look for money since he asked to send money twice a day.)

To cope with her situation, she tried to commit suicide by cutting herself with a knife on her wrist. Aurelia and her relatives did not notice her slide to self-destruction, until she wound up in hospital.

At the hospital’s ICU, Crispina called Lopez to get back the money even it was nearly impossible.  But she was just told to deposit the remaining balance to get it.

(I called the man to get back the money to use for her hospitalization but I was told I could not get it even a peso. I was told to deposit the remaining P1,600 so that he could have President Duterte to sign it to release the money.)

Crispina said they will seek assistance from authorities to identify and locate Ramon.

Some residents in Trinidad said they also received text messages claiming to be from government agencies, private companies or well-known organizations, announcing they have won a prize or money, and requiring them to pay some fees to claim the prize.

The National Telecommunications Commission (NTC) had already warned the public against rampant cases of text scams.

Recently, police have reminded the public to be vigilant about investment scams, pointing out that even police officials had fallen for them.