My Tweets
Hobbies and Interests Science and Technology 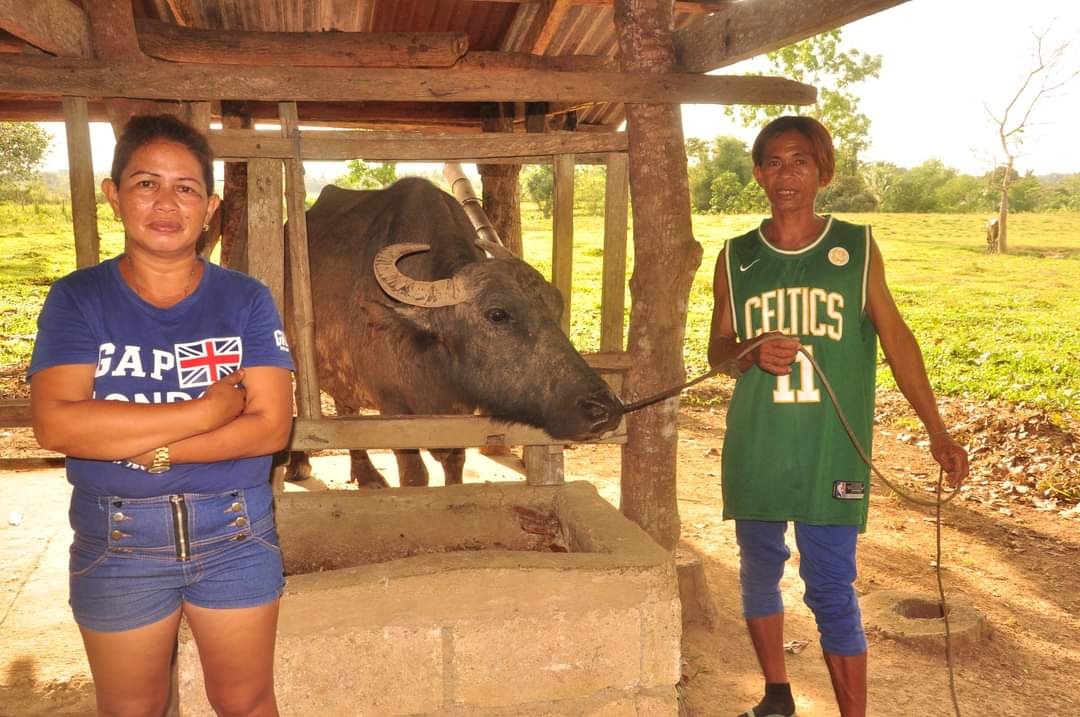 We came to a small house on the edge of a road that parallels a diversion canal in Purok 8, Katipunan, Alicia one Saturday afternoon.

The house, while small and needing repair, exudes an aura of warmth and family comfort.

Behind it is another equally small house, complete with drying laundry characteristic of Boholano houses on Saturday afternoons.

This should be a house extension for a married son or daughter.

Dominador Moneza and his family lives here in a small fenced lot, a small motorcycle washing shop on one end of the fence, and small store that serves the needs of neighbors is temporarily shut for the day.

The few flower pots randomly placed on flimsy racks, or planted directly on the ground betrayed the plantita who is residing the house. Later, we found out it was a plantito. Dominador himself is a sworn green thumb, a luck the wife does not possess.

Behind the house are vast rice fields bordered by mango trees.

No one was at home. That time, Nador, short for Dominador, 47 years old from nearby Bulilis in Ubay and his wife Julieta 45, of San Pascual, also in Ubay were joining in for a bayanihan harvest some few farms away, so we learned later.

Harvest should have been sufficient if they owned the land they are tilling.

A study by the Department of Agrarian Reform shares that a family with three children could live comfortably from a three-hectare rice field.

With the nearby National Irrigation Authority canal bringing in abundant water from the nearby Malinao Dam, it should be more than enough.

Nador and Julieta have three kids, one died of hydrocephalus and a married daughter and her family as well as unmarried son, lives with them.

But Nador and Julieta are no land owners here.

They just came here from Ubay, to take care of the Aumentado property, some 3 hectares of rice fields, a few hectares of root crops: camote, cassava and coconut trees, 9 hectares all in all.

Like this cropping, stem-borers got into the growing palay, speaking in Cebuano vernacular, Nador picked a rice head sticking out from the nearby paddy and showed a chaff-filled bunch.

“We salvaged a few from the harvest, but then this would be a hard season,” he continued, even as his son arrived bringing in half a sack of palay waste from the threshers. From the half a sack, the family hopes to save a few kilos worth of rice which supplements the family table.

But no matter how hard they would feel it, the Monezas still rank a bit better than the rest who are in the same predicament.

Beneficiaries of the Philippine Carabao Center (PCC) at the Ubay Stock Farm Dairy Buffalo Module (DBM), Nador and wife Julieta joined hands, not only in marriage but in taking care of the female carabaos they milk to contribute to Bohol’s dairy production.

“It was in 2015, when the late Dr. Benjamin Bernales, explained and convinced us to try the carabao dairy production when one female gave birth to a calf. For five months after birth, we were able to get a liter of milk, in excess of what the calf needs.” Nador narrated.

The carabao, of native breed, was not the ideal carabao for dairy production but learning the technology of harvesting milk was what the Monezas got. Later information revealed that while native carabaos gives little milk, the milk is ideal for the Filipino white cheese, the milk contains more solids and fats.

Years later, they were into more female crossbred carabaos included in the DBM of the PCC.

“The more carabaos we got, the more milk we can get especially when the PCC gave to us crossbreds which is ideal in milk production. But then again, we have to develop napier patches so there would be sufficient feeds to fatten the females while nursing the calf,” he said.

From a liter a day in the duration of the calving, the Moniezas gathered an average of 6 liters a day when their five native carabaos give birth to a calf alternately. Monezas plan to expand their dams some more.

With about a year of gestation period, the Monezas have at least two carabaos giving off six liters of milk every day for the whole year.

A calving female can continue to give milk for five months, and then its body would again prepare for another estrus cycle, when the dam or female carabao has to be fed right to increase its milk yield, explains PCC at the Ubay Stock Farm center director Dinah Loculan, in one radio forum at the Kapihan sa PIA.

Nador said he has a crossbred dam that gives at least eight liters of milk a day.

“Another good thing about dairy production is the obvious cash flow with the calf,” Dr Laculan added.

Besides, the PCC has its collecting van rounding up dairy farmers’ milk regularly, so the milk immediately goes to the processing center and nothing is wasted.

At P50.00 a liter, farmers here in Ubay, Pilar, Mabini. Alicia, San Miguel and some more expansion towns are joining in the bandwagon, according to the PCC.

But not all interested farmers see the logic of dairy farming, Moneza revealed.

Short of this, carabao dairy production would fail.

For the Monezas however, their little success is never a question of hardwork, it is more of persistently getting the most out of their time, something ordinary farmers may not really do. (rahchiu/PIA-7/Bohol)