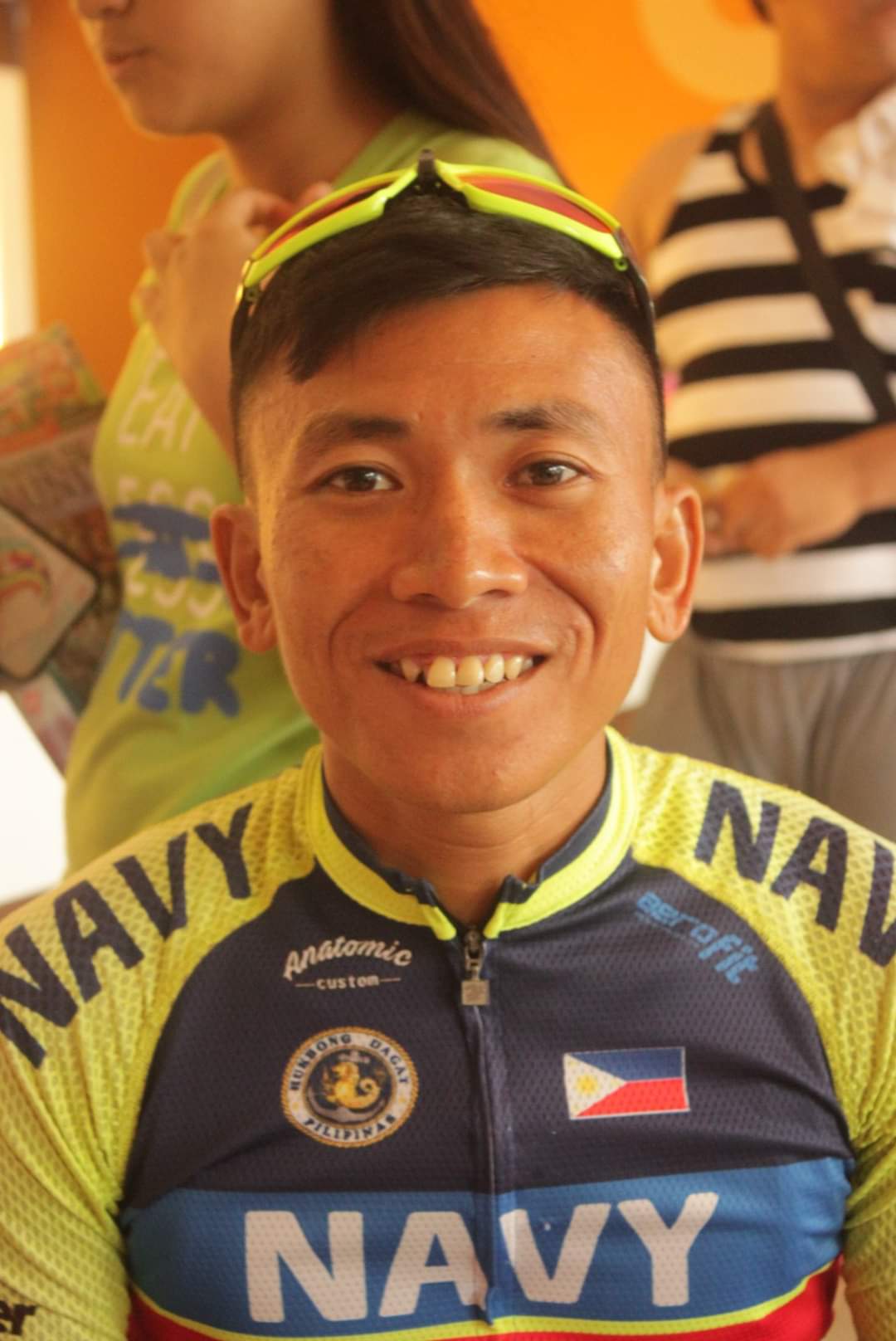 As a young kid, he has dreamt of getting a new pair of shoes.

Poverty and an unstable childhood kept him from getting that.

Today, as Boholanos are clasping their palms praying for luck to a local swimming sensation making ripples in the Philippine swimming circles, another Boholano contribution to the national pool of athletes for the upcoming ASEAN Games, still runs with an old pair he bought at an ukay-ukay rummage.

Unknown to most, unlike most Philippine Team athletes who bask on national television, this Boholano from Cambangay Norte, San Miguel Bohol remains humbly hidden from the cameras in the country.

But somewhere in Asian races, as he silently traverses the trails and roadways of Malaysia, Indonesia, Singapore, he gets occasional media attention, his old battered shoes even climbing a dais.

Shoes are secondary. Toning his muscles to get him to the podium is the motive and this can only be through painful training, dedication and discipline that has put a Tagbilaran swimmer into the same national team for the ASEAN Games.

Boholano duathlete Emmanuel “Doy” Comendador literally crawled his way through hard work, discipline, mental toughness and perseverance to be picked part of the Philippine Duathlon Team for the ASEAN Games to open next week.

The achievement, for Comendador, 31 years old, was never walk in the park.

In fact to him, it was through biking, and running, and biking and running in a vicious training that would literally burn-out the mentally weak, that kept him focused: shoes, immaterial.

Born to a poor family and too weakened by the hardships of a child fending off his way to a future that has nothing to do with what he was born into, leaving a painful hungry childhood in Limasawa Island, Southern Leyte was Doy’s first long run.

His decision to swing to sports as a way of forgetting his past and building a strong resolve to mold a full-toned body from an emaciated spirit was his first plan to voluntarily escape his past.

That resolve pushed him to go past the edges of pain and sacrifice, let him inch his way to join a Leyte bike group. From then on, he cranked up more muscle straining and hurting revolutions in his pedals than almost everyone in his group.

“I had a painful past I wouldn’t want to talk about. What is more painful than that?” he timidly asked, when posed with what his most painful training regimen was like.

“All training is painful, because our coaches know how to squeeze out the best in us. Believe me, it is not easy and is far from painless, he said, severely sun-blasted face and bulging veins in his hand witness to the hard training showing even in the dimly lit café.

Sharing how he disregarded the weird looks of other athletes when they see his old sneakers, he said “I couldn’t buy one, so I have to use this old pair.”

Already a strong biker when he left Leyte, Doy decided to live with an aunt in San Miguel. Since then, he considered himself an adopted Boholano and has since used Bohol as his home address.

While in Bohol, he banked on his bike riding speed in Tagbilaran, knowing that there is far better chance here than in San Miguel.

But with very few bikers then in Tagbilaran, he decided to shift to running where there was prize money to sustain him.

Starting a cross training for running in 2014 in Bohol, Doy, who has logged long hours on a bike, became a sensation.

His long rides and improved spinning cadence on road bikes and off-road mountain bikes worked on his glutes, quadriceps and hamstring, while his calves gradually trimmed from running regimen.

Having worked on both disciplines, Doy became a fixture in Bohol runs, and occasionally on road races, capping on his podium finishes, while getting adopted into a legendary local bike group Paseo de Loon was his biggest break.

“Joining the team got me into more races, winning most. There, I strengthened further my training further, he humbly confessed. “I would never have won in these races, if I raced alone.”

But while racing has been in his blood, the young phenomenal runner started to swing back to a run-bike-run training regimen, while securing his future by pleading his sponsored team if he could pursue college.

He asked his team if he could take up Marine Engineering at the local Philippine Maritime Institute (PMI) while representing the school in races. When the team was more than willing to support him, he run further and swung off to Paseo during his lean days where there are no races in school, Richard Acero, another athlete where Comendador stayed in Tagbilaran volunteered the information.

Comendador said he felt like he was family with the Aceros, and it helped him immensely, he said adjusting his running shades as the café filled with light banter from patrons.

Sitting now with a girlfriend who also runs marathons, Doy said his break came in the eighth qualifying leg of the 37th National Milo Marathon eliminations in 2013 in Bohol.

Then a graduating Marine Engineering student at PMI, despite lack of training as he was busy preparing for the closing exercises, the phenomenal biker and amateur runner still bested 6,153 athletes and carved for himself a name winning the 21 K half marathon. This catapulted him into the National Finals.

With free travel and accommodations, he went to Manila and competed in his first Milo marathon performance, placing among the top finishers.

The following years, Comendador would win the 2014 and 2015 Milo Marathon qualifiers and placed top among national finalists.

This got the attention of national coaches who invited him to train with them.

Running under Philippine Navy in national races, Doy continued with zealous training and pious respect for the coaches which he never had the luxury in his races.

Running races while on training with the national team did not obtain for him the perks of a full-time athlete. He has to look for sponsors to help defray the costs while in Manila.

Enter, Standard Insurance, who picked him to carry their banner in his race jerseys.

The sponsorship also allowed him to survive in Manila, although not well. Scrimping on a tight budget was nothing new to him. If for his dream, Comendador knew he had to persevere.

In 2015, at the Philippine Duathlon National Championships, Elite Men Category, he finished 5th and so was his finish in the 2016 National Duathlon Championships five months later.

Shifting to triathlon, Comendador competed in the 2016 Subic Bay NTT ASTC Triathlon Asian Cup and placed 11th but was the third Filipino to the top with John Chicano and Mark Hosana competing against a full roster of Asia’s elite triathletes.

By March of 2017, Doy took his first international podium at the 2017 Putrajaya ASTC Powerman Middle Distance Duathlon Asian Championships when he placed third against a Dutch and an Australian. Here, he also picked his first Asian championship.

In March of 2018, Comendador again placed fourth at the Putrajaya ASTC Powerman Middle Distance Duathlon Asian Championships, this time with another Filipino John Chicano placing third after the Dutch and an Aussie.

This year, he competed again in the 2019 Putrajaya ASTC Powerman Middle Distance Duathlon Asian Championships for Elite Men and dropped in finish ranking to 8th but was among the three Asians in the top.

In fact, among those on the top were himself, and two more Filipinos, and an Iranian.

Now competing against Asians, the self-appointed Boholano athlete said he has seen a near perfect moment to strike a gold medal in the ASEAN Games, After all, he has proven to Asian duathletes that he is somebody they can be running after.

As a member of the Philippine Team now, Doy still wears old running shoes, which he said he bought at an ukay-ukay, while his competitors sport the newest models from the greatest brands.

Asked if this bothers him, he said he dreams of a new pair but his allowance would not allow him that.

“I tried the new Nike when a friend runner let me try it. It was comfortable as it was designed to fit a runner’s foot profile, but I just can not afford that, so I have to be realistic and run in my old pairs. As long as it does not give up on me, like I have never given up on my dream, there is still that huge chance I’d get a gold. Would that not be a bigger shoes to fill by other Filipino athletes after me?” he asked speaking in Cebuano.

Whether one talks about his old shoes and the resolve to bring honor to Bohol and the Philippines, this guy has just shred a tale worth commending.

Than can happen, when the country would well be this guy’s comendador.