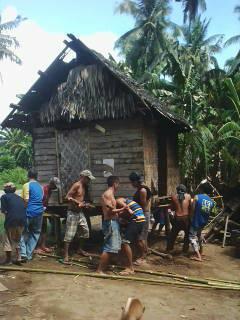 A group of men helps carry a nipa hut, ‘bayanihan-style,’ to its new location somewhere in Barangay Luyo  in Inabanga town, Bohol on Sunday, June 16.

According to Torete Sayo who captured the scene, the men were relocating the house of Berto half  kilometer away from its former location.

In modern times, when we think about moving house, we picture the search for a new house or apartment, packing belongings, and moving furniture.

However, the house-moving tradition still exists in some parts of the country.

People call it “bayanihan” which literally means “being in the community” or “teamwork.”

Some houses in rural areas are still made from indigenous materials-bamboos and thatched roofs.

When a family wants to move to another place, they ask men in the barangay to help carry their house to the new location.

Several long bamboo sticks are inserted all over the foundation of the house and any available men find places at each end of the bamboo sticks and carry the hut on their shoulders in unison.

After the grueling and tiring event, the owner provides food and drinks like bahalina (fermented coconut  wine).

One thought on “‘Bayanihan’ still works in Bohol town”