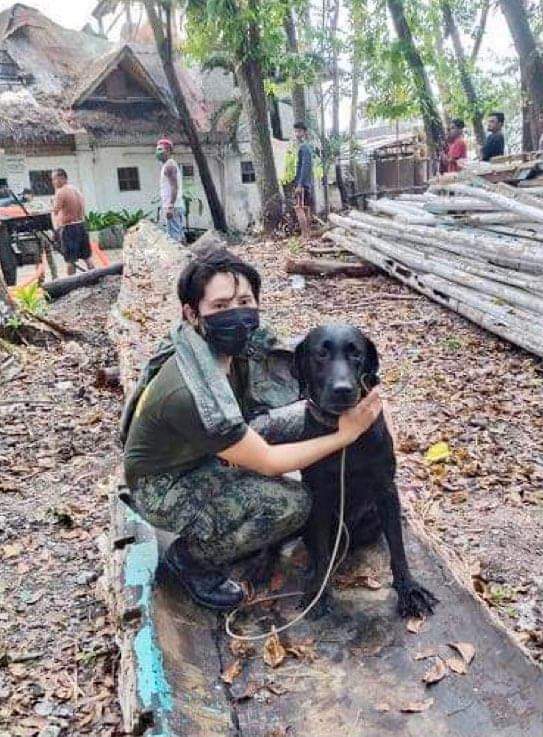 A young policewoman risked her life to rescue a 5-year-old dog trapped in a building razed by fire yesterday afternoon in Barangay Liloan, Santander, Cebu.

Patrolwoman Mona Lee Saludar narrated that the dog was hiding under a table near the kitchen of Kingdom Resort while the fire engulfed the second floor of the building.

“He looked very scared and was already panting when I saw him,” Saludar said.

The black Labrador Retriever named Deabak is one of the three dogs of resort owners Sim Sunbo and Han Eun Kyeung, both Korean nationals.

They were in Dumaguete City when the fire happened. The fire started in their room on the second floor where their two small dogs, a poodle and a shih tzu, were staying. When the caretaker noticed a thick smoke from the room, they opened the door and the two small dogs ran downstairs and got out of the building.

Daebak is staying at the ground floor and also ran away when the fire started. However, he got confused and went back inside the building.

Saludar said that at around 2 p.m., they got a call at the police station about the fire. They responded and when they arrived, the fire was already out of control because the second floor was made of light materials.

She asked one of the resort employees if no one is trapped inside and she was told that their Labrador is inside and they don’t know how to get him out.

Saludar said she saw Daebak just sitting under a table and she immediately got the urge to save the dog.

Despite the risk, Saludar decided to rescue the dog. The firemen wet her clothes to cushion the effect of the heat inside the burning building.

She admitted that she was worried that burning debris might fall on her but she was determined to save Daebak.

Outside, she gave Daebak water and after a while, she wet his fur to lower his body temperature.

At past 5 p.m., the Korean couple arrived and Deabak, as well as the two small dogs, are reunited with their humans. The cause of the fire is yet to be determined. Damage is pegged at P1.5 million.

Saludar, 26, joined the police service in 2018 and after finishing her training in 2019, she was assigned at the Police Regional Office (PRO) 7. She was among the Covid-19 frontliners who secured locked down areas when the pandemic started.

In March 2021, she was reassigned to Santander Police Station.

The policewoman, a native of San Remegio town in the north, is from a family of dog lovers. She grew up with several Aspins, most of them are strays who came to their house to ask for food.

Saving Daebak even if it meant risking her life is one concrete proof that she indeed is a true blue dog lover.