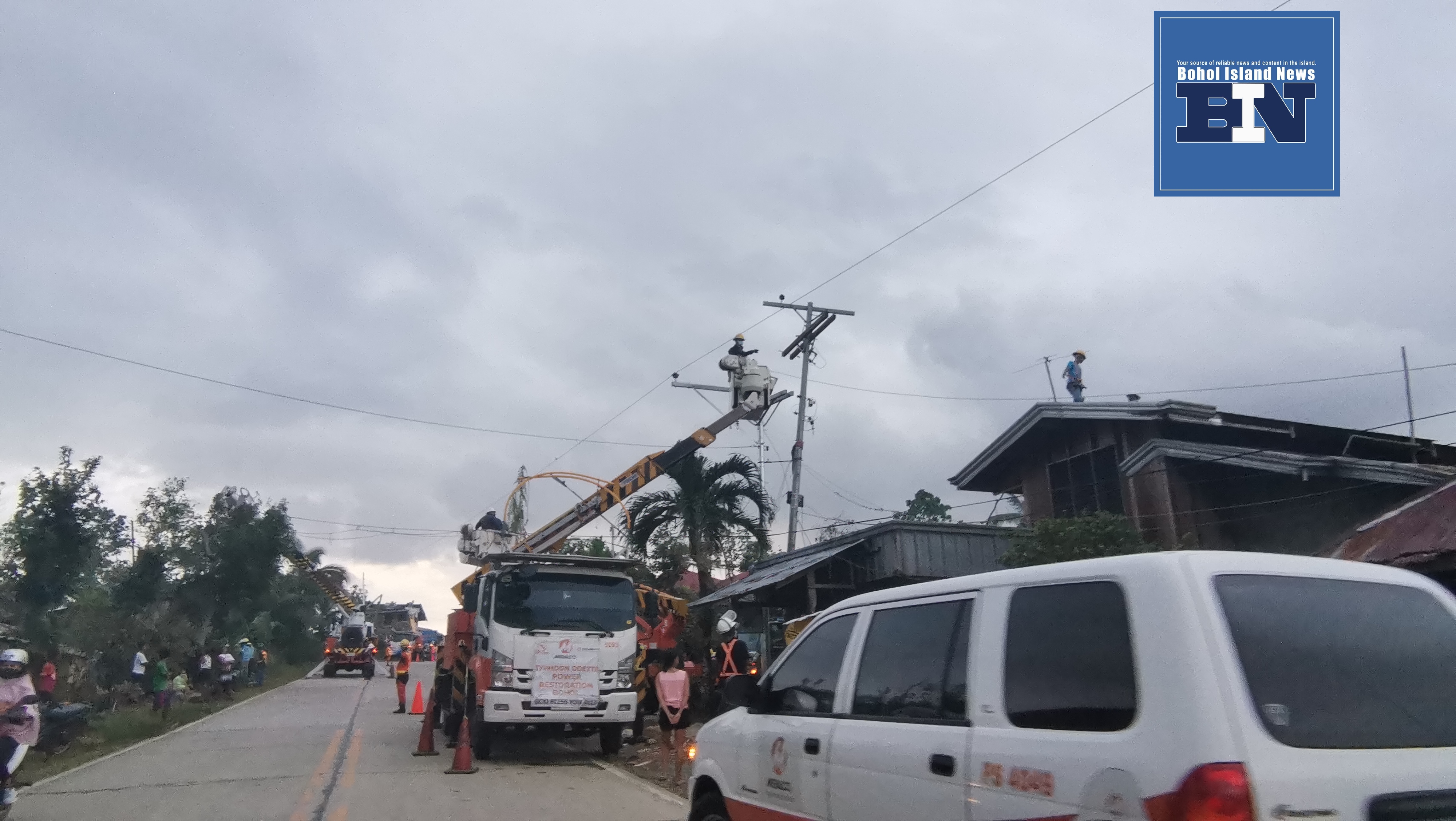 “Now that the power supply has been normalized since February 9, the ball now is in the hands of the DU who now has the responsibility to reconnect their consumers by restoring their lines faster so that the power supply which is now available, can get to the consumer’s houses,” a businessman whose small store is tapped in a residential line, so was not among those first reenergized.

“We have incurred huge losses already, from the pandemic, to the typhoon and then the power problems. A few months more, and we would probably close shop,” he added.

Left without sustainable supply of power for nearly two months, Boholanos have resorted to social media their exasperation at the fact that Bohol has not set up its own sustainable and dependable island-based power supply, and hoped the National Grid Corporation of the Philippines (NGCP) could fast track its repair to the 128 kilo volt (KV) line connecting Bohol to the Visayas Grid.

Repair of the NGCP lines were initially estimated to take at least four months.
Left off grid after the storm turned the NGCP special towers into crumpled steel scrub, local DUs like Bohol Electric Corporation 1 (BOHECO 1), Bohol Electric Corporation 2 (BOHECO 2) and Bohol Light Company Incorporated have to rely on rationed power from a private supplier’s Power Barge 104 and a few small sources of diesel and hydro plants.

Largely using power generated using diesel fuel, the available temporary power supply was not only short, it is also expensive that a pass-on charge would he carried by the few households whose connections have been restored.

While the NGCP worked day and night to erect Emergency Restoration System (ERS) modular towers to temporarily string the high-tension power lines carried by the toppled special towers, DUs also took to the task fixing their backbone power lines that could carry the power, once available, to their own distribution sub stations.

The DUs responsibilities does not stop there. They need to re-erect toppled and broken lateral lines to bring the power from their substations to the barangays and then to the household consumers.

Of their lateral lines, they have restored 1298 of 4452 of the total poles they need to re-erect, replace or correct to bring back the lines near the homes.

Because of this, BOHECO 1 has energized 34,621 active connections out of the 157,060 consumer members within the 26 towns under their franchise service area.
This, they added is 22.04% of the connections less the 28,395 totally damaged households which could not be re-energized until these are fixed or rebuilt.

For BOHECO 2, as of their last update which was last January 24, of the 21 towns with 131 barangays under their service area, they have brought back the power to 27.52% of these barangays while awaiting for the NGCP to let out the sustainable power supply.

In the house holds level, of the 145,109 active household connections, 11,128 have been restored, or some 11.40 % of the total households that can still be reenergized.

Some 47,478 houses in their service area were declared totally damaged and can not be safely reenergized until these are fixed or rebuilt.

The rest of the franchise area are already energized or were awaiting the signal from the NGCP so the DU can deliver the load as this becomes available.

And now that the stable Visayas Grid supply is available, it is up to the DUs and their augmentation missionary linemen from brother electric companies helping in the repairs to bring back the power to the homes soonest. (rahc/PIA-7/Bohol)

2022 WONT BE AS BRIGHT. With over 70,000 houses totally damaged by typhoon Odette, distribution utilities would not be re-tapping their connections until these damaged houses are fixed or rebuilt, for safety purposes. This while NGCP has normalized the power supply in Bohol by using temporary towers to received the sustainable power supply from the Visayas Grid. (rahc/PIA-7/Bohol)