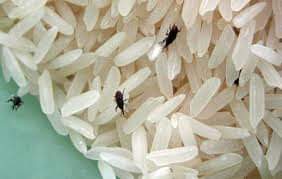 Tourism workers in Loboc town who were affected of the pandemic have complained of receiving smelly rice with weevils from the provincial government of Bohol.

“The rice was smelly and all those who received it did not even cook it, ” said Loboc Mayor Leon Calipusan who personally inspected the spoiled rice.

Calipusan said 180 packs of rice which contained 10 kilos were left at the Loboc Tourism Building after tourism workers refused to claim their spoiled rice subsidy.

At least 1,076 workers in Loboc, known for its river cruise, affected by the Covid-19 pandemic were beneficiaries.

But Maita Tecson, provincial social welfare and development officer, said that the rice packs were new and had no foul order.

She said the rice packs were distributed last Oct. 16 in Loboc town.

“Maayo to condition pagbilin sa ila, paghatag sa ila ,” she told reporters on Tuesday after a press conference at the Bohol Provincial Police Office. She also refused to answer questions from GMA News and Inquirer reporter.

Gov. Arthur Yap on Tuesday, he said that if the rice was smelly and spoiled because it was kept by the municipal government for a long time.

However, Calipusan said they had no negligence since the rice were kept safe. He said some tourism workers had received infected rice during the distribution.

There were only 329 beneficiaries who claimed the packs and the remaining 747 packs were left to the LGU for distribution through the municipal DSWD.

Calipusan said he was thankful for the help but he felt “insulted” by the allocation of poor-quality rice for his town.

(What they think of the people of Loboc? Are they evil even those tourism workers to malign the governor? They are not that. That’s the problem with the provincial government officials they don’t accept their mistakes and blamed ordinary people. If we have such leaders we don’t succeed), Calipusan retorted.

Calipusan said if Capitol has a plan to replace the infected rice they should replace it immediately for the benefits of affected workers.

The National Food Aurhority (NFA) -Bohol also clarified that the rice distributed was free of any weevils.

“We assured the public our rice is of good quality and condition.

She said they have proper warehouse management.