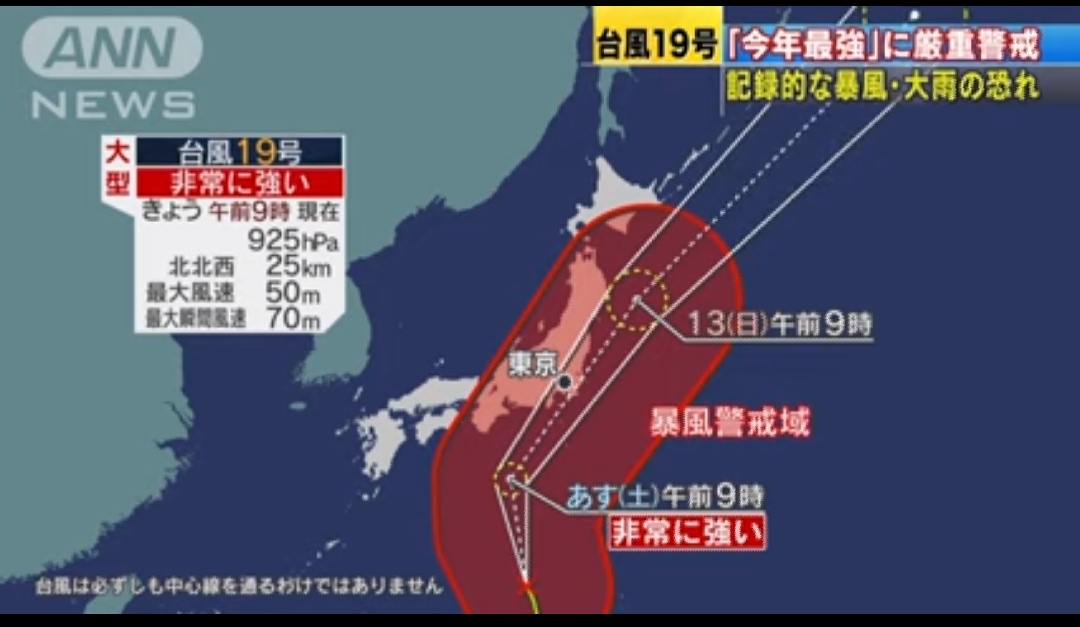 As a powerful typhoon threatened to make landfall in central or eastern Honshu in Japan over the weekend, railways and supermarkets announced plans to suspend or minimize operations for much of Saturday.

In a statement Friday, the Meteorological Agency said Hagibis is considered as a “violent typhoon” which is the “highest category on Japan’s typhoon scale.”

The Department of Foreign Affairs (DFA) on Friday urged Filipinos in Japan to exercise caution as Super Typhoon Hagibis is expected to make landfall there this weekend.

The Philippine Embassy in Tokyo advised Filipinos to avoid traveling to Japan until the weather disturbance has dissipated.

“The Embassy has asked Filipinos in Japan to be careful as heavy rains, strong winds, high waves, and storm surges are likely to occur, and to avoid travelling to potentially affected areas until the typhoon has dissipated,” read the statement.

DFA noted that Japan Airlines and All Nippon Airways announced the suspension of domestic flights starting on Friday.

Train operations in Greater Tokyo Area may also be canceled if the forecast of typhoon will not change, the department added.

The DFA, likewise, asked Filipinos to monitor news and updates on the typhoon via Japanese government and the JMA.

At a Friday morning news conference, agency official Yasushi Kajihara said the storm was such a threat that a special heavy rain warning might be issued.

According to the agency, Hagibis could trigger record rainfall on par with a deadly typhoon in 1958 that triggered mudslides in Kanto and flooded the Kano River in Shizuoka Prefecture, leaving 888 dead and 381 missing.

Major transportation disruptions are in store this weekend.

The Shonan-Shinjuku Line, for example, will be halted for the entire day, with other major routes, including the Chuo, Yamanote, Saikyo and Keihin Tohoku lines, being halted at around noon. It will also significantly scale back bullet train runs, with few shinkansen slated to depart from Tokyo after 1 p.m., it said.

Supermarkets are going the extra mile on safety precautions.

In a rather unusual step, major chain Ito Yokado said it will close 124 outlets in Tokyo, Kanagawa, Chiba, Saitama, Ibaraki, Gifu, Shizuoka and Aichi prefectures throughout Saturday. Department store Isetan Mitsukoshi Holdings announced the same day that its Shinjuku, Ginza and Ebisu stores in Tokyo will close on Saturday as well.

Theme parks are no exception either. Tokyo Disneyland and Tokyo DisneySea will close on Saturday for the first time since the Great East Japan Earthquake struck in 2011, operator Oriental Land Co. said. Universal Studios Japan said its Osaka facility will do the same.

Asked what measures households can take to prepare for such contingencies, Kannaka recommended filling bathtubs, kettles and buckets with water that can later be used to flush toilets and fulfill other domestic purposes. Flashlights, lanterns and portable radios will also come in handy in the event of a power failure, he said.

Other safety precautions, he said, include taping windows in all directions to prevent them from fragmenting when they break, stocking up on enough potable water for three days, and topping up the gas tanks of cars and other vehicles.

Residents are also advised to charge their smartphone batteries, secure laundry poles and empty fridges of perishable food that could spoil in a power outage.

While Hagibis is likely to prove a headache, perhaps few dread its approach as much as residents in Chiba who are still recovering from the havoc wreaked by Faxai just a month ago. with reports from Japan Times