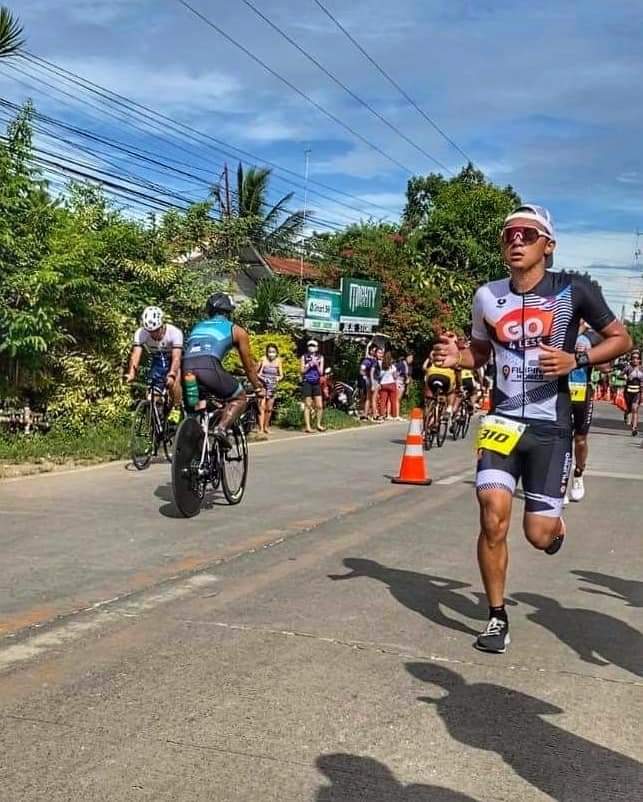 Boholano resilience and resolve to take on anything can well be the lesson the recent Ironman 5150 has to teach Boholanos. Being just the best in wherever and whenever one has to, and in elite racing or in struggling to clamber up after the crippling effects of the global pandemic, Bohol and Boholanos have shown unparalleled resolve.

The story of Jonathan Pagaura, a Boholano athlete who has elevated his game to the international arena, could aptly be Bohol’s story as well. Faced with an opposition of 342 eager and raring athletes who wish to top their best records, Pagaura to Boholanos was an infant in elite triathlon where age matters the least.

He was last seen competing in local duathlons and bike races. Not much of triathlon, especially when the sport is yet to earn its wide followership in Bohol. Yet another man, who has also transitioned into the elite sports, is a young guy from Lanao de Norte.

The two men are now elite triathletes with almost the same build, with pandemic-disrupted training and finally raring to shake off the rust gathered during the two years of contained workouts.

Two years of indoor training as pandemic restrictions prevented them from openly competing.

Yet it is simply not enough to approximate the strain of physically sensing the heat of competition breathing at your nape.

Pagaura, now part of the Cebu-based Team Rider Omega and Satar Salem of the Tri-Sultan Naga Dimaporo (SND) Barracudas of Lanao del Norte, were among the 342 who competed in the recent Ironman 5150 Bohol edition.

Racing in an Olympic style competition sanctioned by the Ironman as a tune-up swim-bike-run race for the Ironman 70.3 in Cebu next month, it was nobody’s game at the starting line. Pagaura, a Bohol favorite, wearing bib 313, was bobbing on the wake of Salem15 minutes in the 1.5 kilometer swim segment and the Boholano finished the open water course in front of the Bellevue Hotel and Resort in 22:22.

On T1, Pagaura was a tad faster by 11 seconds against Salem towards the bike segment, but that only put him closer to the competition.

On the bike segment, Salem again came out stronger, finishing the 40 kilometers in 58:50 while the Boholano did it in 1:00:58, nearly two minutes of time deficit.

At the end of the 3-discipline endurance, speed and agility competition, Salem came out the fastest overall at 2:07:40, the first also to cross the finish line on the Male 24-29 age category while Pagaura came in next with 2:08:04, who was also 2nd in the M-24-29 age category trailing the fastest man at the Bohol triathlon only by 24 seconds.

Fifth overall was Mohammad Hanin Maruhom at 2:14:12, who belonged to the M24-24 with Salem, Pagaura and Lamama, grabbing the fourth in the age bracket. After Maruhom was Julian Sebastian Teves who was a second slower and claimed the 5th place in the M25-29 group with 2:14:13 in his time chip.

Cebuano Kristiane Glendale Lim, with a time of 2:14:26, came in first in the M35-39 age category and 7th overall. After the Cebu sensation is John Dedeus Alcala, at 2:14:31 or 5 seconds after Lim. Alcala came home with the 6th place in the age bracket and 8th overall.

The Bohol 5150, which was a tune-up competition for elite athletes who would be joining the Ironman 70.3 in Cebu next month, also brought out Boholano aspiring thriathletes.

Among the Bohol 5150 top finishers are Kim Zian Bartolata, who came in 10th in the M20-24 and 62nd overall on the race with 343 participants finishing the three discipline race, and Jervis Marimon, coming in 78th overall and 7th in the M40-44.

The Bohol event, which came after the 2017 race of the same name at the Bellevue, had athletes bringing their families, support crew and friends for at least three days of fun in the beaches of Panglao and exploring Bohol.

Coming right when Bohol is recovering from the pandemic, the race, according to Disaster and Risk Reduction Management Officer Anthony Damalerio, had athletes spending at least a thousand dollars for their Bohol sojourn and race.

The race also attracted several local athletes in the Sunrise Go for Gold Sprint event with 120 slots opened for the shorter course. While most of the Sprint event had locals, nearly half of the competitors were also from outside Bohol billeting in Panglao resorts, further perking up the local economy.

As to local sports scouts, the Sprint event had a local team of the Provincial Youth Development Office (PYDO), Triathlon Bohol (TriBo) and many locals in their individual capacities.

For Bohol Gov. Erico Aristotle Aumentado who himself bikes and does indoor training, in his term, the Ironman 5150 would the first among the many in the months to come.

And for Pagaura and the hundreds of Boholanos now into multi-sports, it certainly would be a venue to force the body to develop stronger cardio, grow muscle mass and stretch that stamina to be just as tough and resilient as a real Ironman. (RAHC/PIA7 Bohol)