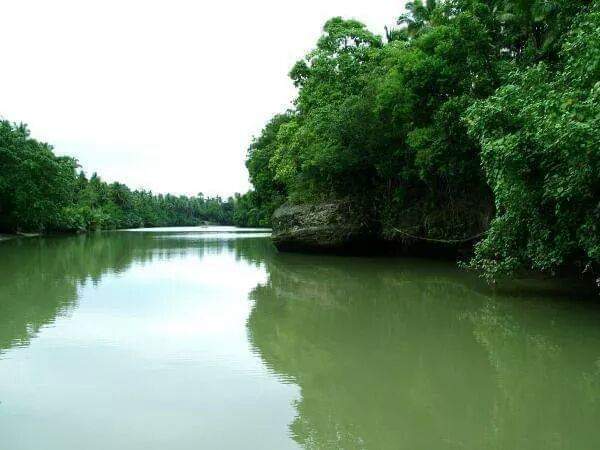 In the province of Bohol, local folk talk about a phantom.

For decades, locals told stories of Macaban City, an otherworldly place inhabited by mythical creatures or locally called as “engkantos”.

According to old townsfolk, Macaban is a mythical city found invisibly in Inabanga town, others believed it could be “a portal to the realm of engkanto”.

The cave’s entrance can be allegedly seen just above the water level.

According to the local lore, the population of Macaban City comprises supernatural beings: the engkantos (“enchanted beings”) and their offsprings with the humans. The engkantos can take a human form, but lack a philtrum, or the veritical indentation in the middle area of the upper lip.

A small number of people claim to have seen the city.

Some residents have claimed to have seen a “dazzling city of light” on moonless nights, for a few minutes.

They have described it as a beautiful city with high-rise buildings and other magnificent structures equipped with advanced technology.

People who lived near the river could see a very big ship with lights and its upper deck was full of smartly dressed passengers dancing and singing.

The dwellers of the place were kind to lend kitchenwares and even wedding gowns and suites.

There was once a family who asked the dwellers of Macaban to help them for the wedding of their son.

Unfortunately, the parents didn’t return the things they borrowed and the fairies became furious. They poured a wrath to the dishonest parents and turned the borrowed valuables into ashes. Then, they vowed never again to lend things to the residents.

Until today, the people of Inabanga still believe and would like to believe the legend exists even after the passing of times.

Every year, locals can hear the foghorn of ship. Residents near the river can feel that a big boat pass by because of the big waves.

Allegedly, the name of the boat is MS Segunda loaded with cacao seeds and fruits for export to America.

The cave and its vicinity have unordinary trees. There are cacao, coffee and other fruit bearing trees which were not grown by the locals. They just grew in the place as if someone planted them.

The late Hilario Aparicio owned the land where the Macaban cave is located.

His son, Dionisio, said his father received letters from US, Spain, United Kingdom and other countries and had the address:

The employees at the municipal post office had the letters delivered to Aparicio for he was known in the town.

Hilario would instruct his sons and grandsons to deliver the letters to Macaban cave.

The couriers would put the letters on the top of the rock inside the cave, then the letters would mysteriously disappear.

In 1925, a retired teacher Daniel Añora narrated that Hilario received a letter from Spain. Exequiel Aparicio, one of the grandsons of Hilario, took the letter to Añora to interpret it because the letter was written in Spanish.

Añora learned that the Macaban dwellers were interested to purchase a big generator.

In 1971, the post office of Inabanga received a letter with its address:

The letter was addressed to Masayan believed to be a dweller of Macaban.

Hipolito Enriquez, the former postmaster, was curious that when he opened the letter, he and his colleagues were so scared that they didn’t disclose the content of the letter until their deaths.

Today, the Macaban cave is off limits to the residents.

It maybe a myth, but it refuses to die.

Locals still claim they could still hear the foghorn of MS Segunda.