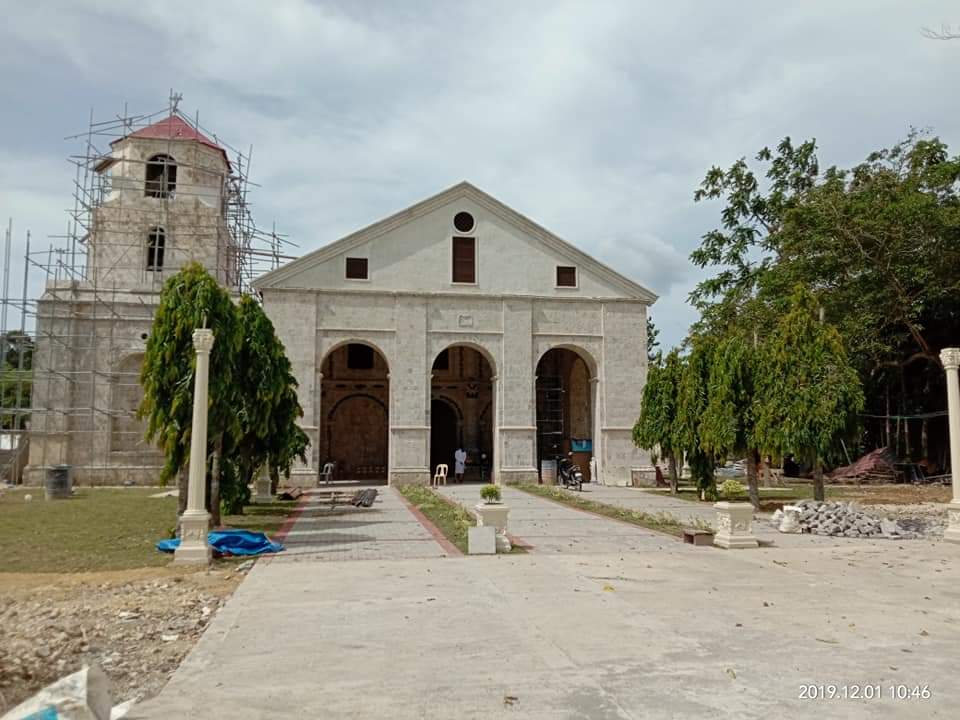 Christmas dawn masses for Cortes town would be a bit meaningful this year.

Parishioners, several of them devout, professed to have the resolve not to miss any of the nine day’s dawn masses inside the old coral stone church, would finally be back in the warm yet cavernous embrace of the newly restored church which the earthquake of 2013 damaged.

It could also be a teary walk back into the past from many who have since not seen the insides of the church that still keeps its 1920s ceiling paintings by Ray Francia.

Church authorities in 2013 decided to barricade the ruined church whose foundations took a severe test when the early morning October 15, 2013 earthquake shook Bohol.

When the dust settled, parishioners saw that the church’s portico façade has become an ugly pile of stone tablets and limestone, the galvanized iron roof shriveled and the old wooden trusses sticking out from the pile of rubbles.

The earthquake also revealed the church’s original façade which could be made by the Jesuits, and effectively hidden when the Augustinian Recollects came in early 1800.

Inside, the left wall of the altar sank a few inches deep and toppled the side walls of the late 17th century baptismal chamber and across the gospel side.

With its foundations declared as compromised, local church authorities have to set up a temporary church in the plaza, one that has since become the venue for the dawn masses in the next three years that followed.

Built from light materials, if only to assure that the church could still offer its services, one that kept the community’s faith alive.

A few years later, a philanthropic family from the town donated for the alternative church which now stands near that old ruined church, at times, would have to ring the bells from the far side of the church plaza where the old tower still stands.

“It’s always nostalgic every time the somber bells ring, calling the community to assemble for the weekly masses. The church, although sustaining what many would call as minor damages, needed a thorough structural assessment, one which could be costly,” admits a young architect who came to inspect and assess the damage.

Unsaon na man nato pagpabalik sa karaang simbahan nga maglisud na man gani tag pangita’g makaon? (How can we rebuild the old church when we could hardly get food?) a regular church goer finally aired what many people have kept to themselves.

Cortes is a fifth class town and ranks among the province’s poor.

Unknown to many however, months before the earthquake, Rev. Fr, Milan Ted Torralba of the Diocesan Commission for the Cultural Patrimony of the Church, the committee that keeps track of the religious heritage of the church, has submitted Cortes’ Santo Niño Church for the National Museum’s declaration as among the country’s Important Cultural Properties (ICP).

(Let us all pray for a miracle from the Holy Child, that the church would be included in the list of the church’s important cultural properties), Fr. Cañizares urged the faithful.

Fr. Milan Ted Torralba and then Parish Priest Fr. Linuel Cañizares did not leave any option uncovered if only to rebuild the ruined church.

Donations from well-meaning parishioners and Cortesanons abroad started trickling, but the rebuilding amount was just too huge that hope for the restoration of the heritage structure thinned.

The declaration documents however did not come until the local church with the help of a philanthropic family from the town has built an alternative church, which has become the semi-temporary venue for church gatherings and masses.

In 2015, then parish priest Fr. Cañizares broke the good news: the National Government through the National Museum has declared the Santo Niño church as among the country’s important cultural properties and is eligible for restoration funds from the national government.

When by December 3 of 2017, under the new parish priest Fr. Roderick Pizarras, church authorities and the National Museum representatives laid the time capsule containing the detailed plans of the church restoration, the faint hope which the people kept in their hearts glittered, recalled Isidoro Lungay, former Parish Pastoral Council president.

(Elated, finally the church would be restored. The old building is a pitiful structure, seemingly forgotten as the people struggled to rise from the pains left by the disaster), shared one parishioner during the ground breaking ceremonies.

Two years later, Fr. Pizarras announced again that the contractor: 401 Development Corporation and the Diocese of Tagbilaran authorities are now just about ready to turn over the restored church.

By December 14 of this year, church authorities would be receiving from the National Museum the restored church which has cost the national government millions of funds in restoration.

The turn-over also happens six years and two months after the fateful day in October when the church barred its doors for the parishioners, for safety reasons.

Now, with the church gleaming in polished stone and already sporting the old bell tower based upon the pictures in the archives, the church also boasts of ceiling paintings in its gospel and epistle sides, as well as a last supper painting reproduction by one of the sons of local church painter and restorer Rosalio Ortiz.

When there were no visible drainage systems then which threatened the integrity of the church foundations, the restorers now made sure one would be built.

The church naves now also sport spot lighting which enhances the panels in the ceiling paintings.

The church has prepared a short but fitting rites for the turn-over, even as the contractor has rushed the construction of the bell-tower where the antique church bells used to hang.

One more mass and the somber sound of the bells which I use as an alarm clock when I was a kid, and I would be ready to die, an old lady servant of the old church shared.

By then, I would be among the very few who have been baptized inside the church and maybe, get my last rites inside the same church, she added.

Whatever that be, the church would be the national government’s biggest Christmas gift to the faithful of Cortes. (rahc/PIA-7/Bohol)