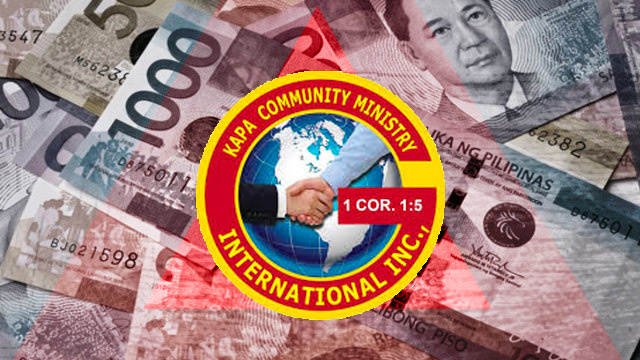 NBI-7 Director Tomas Enrile said the operation is in compliance of Duterte’s order to close KAPA. No other details yet were provided as of this writing.

“There is coordination between the police and the NBI 7. Definitely we will implement the order. The President is correct when he said “where can you find an investment that gives you 30 percent return of your capital a month?” said Enrile.

Duterte issued the order last Saturday. During that day, the office of KAPA in Compostela town was set on fire by at least 10 armed men.

Meanwhile, Cebu Archbishop Jose Palma advised the public to be careful when investing.

“Some people have ways to use schemes to fool other people so let us be careful about joining investments or being gullible about joining certain offers,” the prelate said.

Palma also called on authorities to help prevent the public from falling prey to investment scams.

“I practically think it is the duty of the government to find ways and means to determine which ones are valid and lawful. On my part, I am not an economist so I would not know. But when we say the interests are too high and money seems relatively easy, be careful with that, ” Palma added.

On Tuesday, the Philippine National Police (PNP)  urged victims of the Kapa and other investment scams to file complaints.

PNP spokesperson Col. Bernard Banac said that even after police raided some Kapa offices, only a few complainants have come forward to testify on the group’s alleged illegal operations.

According to Banac, additional complaints will strengthen the case against Kapa officials and against those in other investment scams that mostly operate in Southern Mindanao.

Banac said victims of these investment scams may come forward to either the PNP or the National Bureau of Investigation (NBI) which are tasked to investigate.

Kapa and similar groups were earlier tagged by President Rodrigo Duterte, who also ordered the conduct of probes and if warranted, shut down these companies.

He also urged the public, even police officers, to be wary of such investment scams.