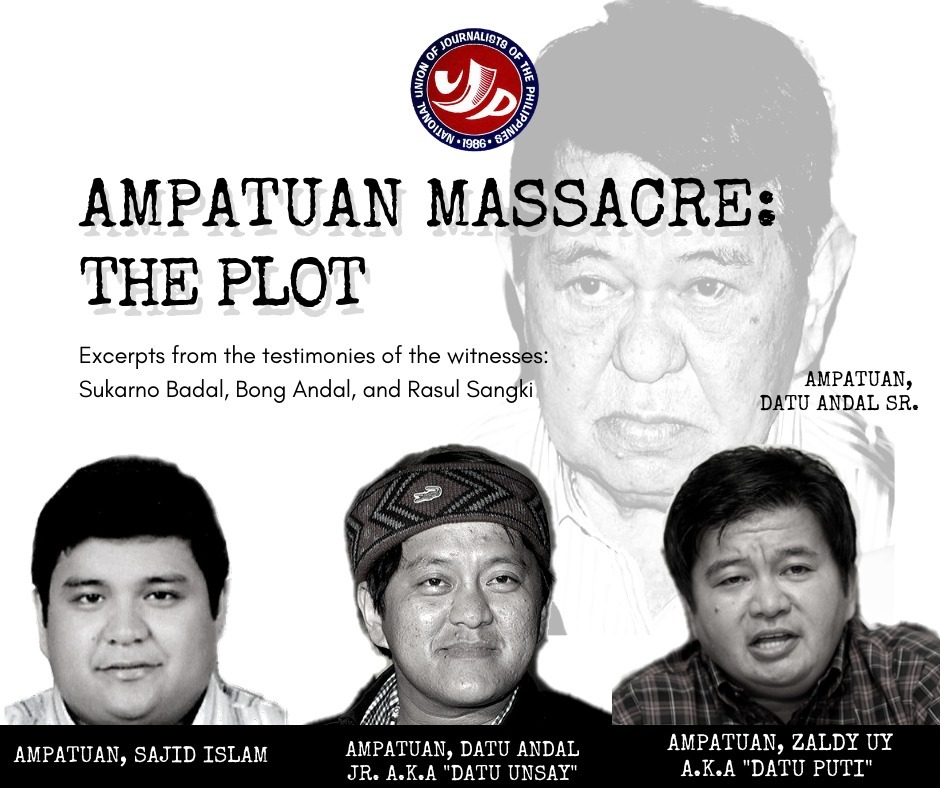 Read how the single deadliest recorded attack on the media was planned through the testimonies of the witnesses of the Ampatuan Massacre:

On 19 July 2019, Sukarno Lauya Badal, Vice-Mayor of Sultan sa Barongis and a commander in the Ampatuan’s private army, sat in the Century Park Hotel lobby waiting for the Ampatuans. The previous night, he had been instructed by Andal Ampatuan, Sr. and Andal, Jr. to come to Manila for a meeting.
The meeting was presided over by Andal Ampatuan, Sr. and discussed security details in preparation for a July 20 meeting between the Ampatuans and the Mangudadatus. Present in the meeting were other Ampatuan family members, allies, advisers, lawyers, commanders, and supporters. The families were to talk about the upcoming elections.

The plan was supported by family members such as Zaldy Ampatuan (Datu Puti), Unsay Ampatuan (Andal Jr.), Jack Ampatuan, along with supporters including Atty. Cynthia Sayadi, Norie Unas, and “Kamaong”, a police colonel, among others present.

The next day the group returned to Mindanao, bringing with them the 200 firearms to be used in the killing.

Badal was then called to Datu Unsay’s house in Shariff Aguak on July 24, 2019. The plan to kill Toto Mangudadatu was once again discussed. He was also given firearms at this location.

Two more meetings were held prior to the November 23 killings. One was on November 16 at Datu Andal Ampatuan, Sr.’s house, and the final meeting on November 21, 2009 at Datu Unsay’s house.

On November 16, Sukarno Badal was called from the municipal hall of Sultan sa Barongis to attend a meeting with Andal Ampatuan, Sr. at his house in Bagong. Upon arriving at around 10:00 AM, he was greeted by a number of armed men, including police officers, on the premises.

Present in this meeting were Ampatuan family members, political allies, advisers, lawyers, commanders, and supporters. On the table was the killing of Mangudadatu and how it was to be done depending on where he would file his certificate of candidacy.

Should Toto Mangudadatu try to file his CoC in Manila, Zaldy Ampatuan and Akad would be in charge of the killing. Should it be in Cotabato, Atty. Sayadi and Norie Unas would be in charge. If Mangudadatu would attempt to file the CoC in Shariff Aguak, Andal, Sr. would take the lead. It was at this meeting that the use of a backhoe was mentioned.

The final preparatory meeting was held on November 21, 2019 at Datu Unsay’s house. Present at this meeting were Andal Ampatuan, Jr., Ampatuan family members, supporters, commanders, and police. During this meeting presided over by Andal, Jr., the installation of checkpoints at roads from Isulan and from Cotabato leading to Shariff Aguak was discussed. The checkpoints were meant to block the Mangudadatu contingent and eventually lead to their killing. Police were to man the checkpoints and flag down the vehicles, while CVOs/civilians would fire at the members of the contingent.

Checkpoints were set-up at Crossing Saniag, Malating, and in Sitio Bente Kuatro in Brgy. Iganagampong in Datu Unsay Municipality. Commanders would be manning every checkpoint, with Datu Unsay, himself at the checkpoint in Crossing Saniag. At the Malating checkpoint would be Major Sukarno Dicay and Insp. Saudi Mukamad with Datu Kanor Ampatuan and his men. Badal would be stationed in Sitio Bente Kuatro, along with Commander Nasser Kamsa, and Commandaer Datu Kamad Ampatuan with Insp. Maliga acting as the police counterpart. There was also a checkpoint at Salbo manned by Commander Sangguten Musa and other checkpoints on the road to Saniag. Each point was manned by 20-25 men.

During this meeting Badal would hear Datu Andal Ampatuan, Jr. say that they would now be implementing the command of the Ampatuan family to kill the Mangudadatus. Datu Andal would also say that whoever would go against their family, especially the Mangudadatus, would be killed.

After the general meeting, the men would deploy to their assigned areas.

Rasul Sangki, who was Vice Mayor of Ampatuan, Maguindanao in 2009, became a witness against the accused Ampatuans in the Maguindanao Massacre case.

In his testimony, Sangki admitted to have received a call in the afternoon of November 19, 2009, while he was attending a convention in Manila. The caller, Andal “Datu Unsay” Ampatuan Jr., informed Sangki that he will be deploying his men around the area of Ampatuan, Maguindanao. When Sangki asked for the reason of the deployment, Ampatuan answered that it was for the Mangudadatus who will be passing by the area. Sangki agreed to have people deployed in the area and the call was ended.

The next day, November 20, Sangki returned to Maguindanao. At 3:00 in the afternoon, Sangki’s driver informed him that he should call Andal Ampatuan, Jr. When he called Ampatuan, he was then ordered to go to Crossing Saniag in Ampatuan town.

At Crossing Saniag, the accused Datu Unsay Ampatuan, Jr. informed Sangki of his plans to ambush the Mangudadatu convoy.

Sangki admitted complying with Datu Unsay’s orders because he was afraid Ampatuan would “get mad at him.”

According to the judicial affidavit submitted by witness Bong Andal, the Ampatuan clan held several meetings days before the massacre on November 23, 2009. One meeting was held in Bagong (a rest house owned by Ampatuan), which Andal admitted attending personally.

He also identified the people present at the meeting: then Regional Governor Zaldy Ampatuan, Datu Andal Ampatuan Sr., Datu Unsay Jr., and other members of the Ampatuan clan.