Amazon rainforest is burning — and smoke can be seen from space 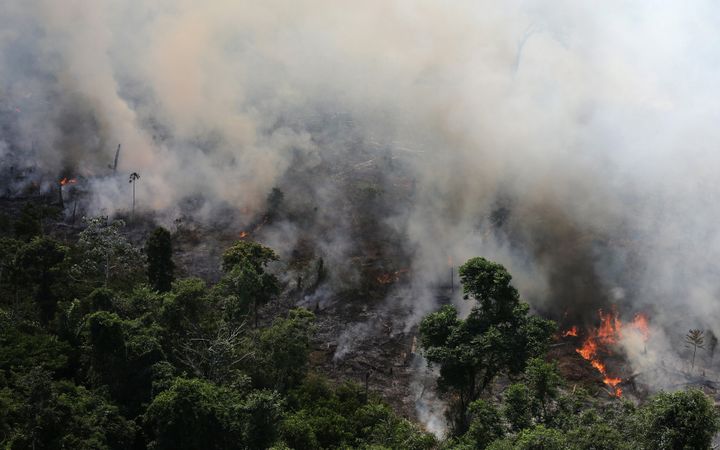 The Amazon rainforest is on fire.

A record number of wildfires have been burning in the Amazon, home to the world’s largest tropical forest seen as vital to countering global warming.

The rampant wildfires spreading across the Amazon can be seen from space, according to new images from NASA.

The images were captured by the Moderate Resolution Imaging Spectroradiometer (MODIS) on NASA’s Aqua satellite, NASA Earth Observatory said in a post. There were “several fires burning in the states of Rondônia, Amazonas, Pará, and Mato Grosso on August 11 and August 13, 2019.”

Amazonas, the largest state in Brazil, recently declared a state of emergency over the forest fires, according to Euro News.

Almost 73,000 fires have been detected by Brazil’s space research center INPE, according to Reuters. It’s a record number this year, the agency said.

The smoke has traveled from the fires blazing in the Brazilian states of Rondônia and Amazonas and blackened the sky above the city for about an hour, the BBC said.

While the Amazon Rainforest is typically wet and humid, July and August — the onset of the dry season — are the area’s driest months, with “activity” peaking by early September and stopping by mid-November, according to NASA.

Fire is often used to clear out the land for farming or ranching. For that reason, a vast majority of the fires can be attributed to humans, Christian Poirier, the program director of non-profit organization Amazon Watch, told CNN.

Twitter users criticized media for giving more attention to the fire at Notre Dame and other news than to the rainforest fires.